What Richard Branson looks for in a leader 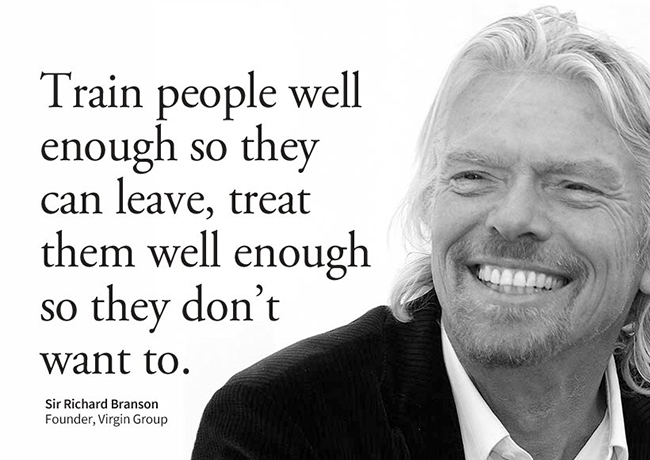 Sometimes, as leaders, we feel pulled in two different directions, do we invest our time and energy in our employees or our customers? While it’s easy to say “both,” the reality is, we have limits on our time, so one or the other is going to get more of it.

Many leaders have addressed this challenge by intentionally focusing more on their team, with the expectation that, if they resource and train them well, their employees will take great care of their customers. One successful leader who promotes this perspective is billionaire entrepreneur Richard Branson. His companies tend to do well in customer service, with Virgin America ranked #1 in the Airline Quality Rating report four years in a row. Virgin America has also been named Consumer Reports Best US Airline (2013) and Best Domestic Airline by Conde Nast Traveler, 2008-2016.

Given this level of success, especially with customers, it’s pretty clear Branson is onto something. Recently, I read an article discussing what Branson looks for when he is considering promoting an employee on his team.

Several traits discussed in the article confirm the approach to leadership that creates an environment that equips and encourages others to step up and lead.

Always on the lookout

One of the early points addressed is that Branson is always looking for new talent to promote. He’s always reviewing and evaluating his people to see who may be ready for a bigger challenge or greater opportunity. To drive the point home, the article relates a story from Branson’s book, Finding My Virginity, which details how he founded Virgin Australia, the country’s second largest airline.

To lead this effort, Branson tapped Brett Godfrey who was, at the time, the CFO of Virgin Express, a European airline. In the book, Branson describes Godfrey as a “great example” of the sort of leader he wants to lead in his company.

What initially piqued Branson’s interest in Godfrey was a note he wrote to a team of newly hired employees. Branson said he saw how Godfrey’s approach to communication got the best out of them, so he kept a closer watch on the leader.

Gets involved in the work

Branson also saw how willing Godfrey was to throw himself into the work. He was intentional about being “accessible and visible” to his team, often “rolling up his sleeves” to work with baggage handlers, so he could talk with them while they worked, listening to their concerns one-on-one.

Gets the details right

While Godfrey was a big picture guy, he did not overlook the details. Branson recalls that Godfrey, “understood the little details of the airline industry that make all the difference…”

Branson loved what he saw in Godfrey, so he was excited to offer him the CEO job at Virgin Express when it became available. Branson says he was initially surprised when the CFO turned him down. Godfrey wanted to move his family back home to Australia. Disappointed, yet appreciative of Godfrey being up front about his priorities, Branson told Godfrey, “If you want to do anything in Australia, let me know…”

As is happens, Godfrey did have an idea for Australia. He suggested that Virgin could do well with a low-cost airline in his home country. Branson, always up for an interesting idea, asked Godfrey to tell him more. He did, and Branson was intrigued. He asked Godfrey to send him a proposal. The next morning, Godfrey’s proposal was on Branson’s desk. Not long after, Virgin Australia was born.

This story is an excellent example of leadership qualities to encourage on your team. When we have people who display these skills and make these choices, yet also remain true to their core values, we do well to create opportunities to let them shine.

What do you think? Are there some other qualities you believe are important to encourage people to lead from where they are?