Trapped by negativity? Here’s a way out. 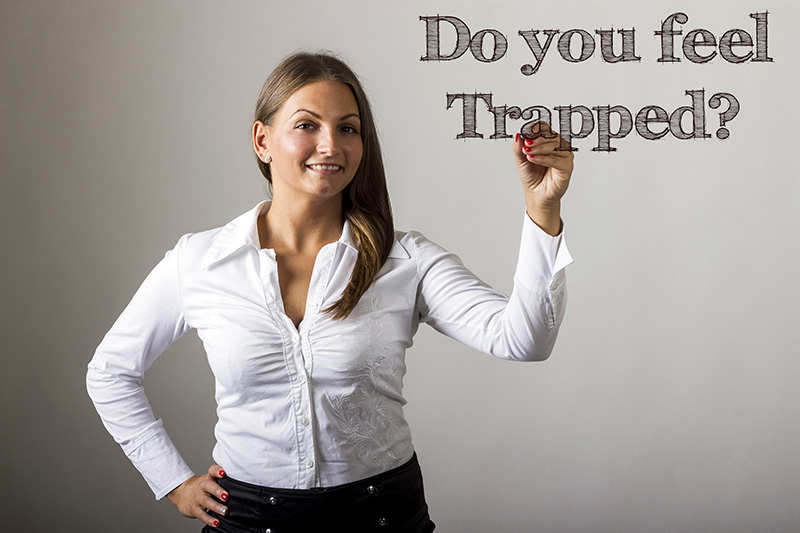 There’s a lot of negativity in the world today, and, sometimes, it feels like there’s no escape from the constant stream of criticism, cynicism and complaining. We see it on TV, in the news, hear it on the radio, read it online and on social media … and, often, hear it in our own heads.

How much better would our day be if our thoughts were focused on being positive and proactive? We all ask ourselves that question from time to time … then we get sucked right back into the routine. Is it really possible to break free?

There are two basic approaches to breaking free: decide to stop doing negative things or begin to make positive choices. That’s it, really. We all get the same 24 hours in every day. Our thoughts and actions in that time will either create opportunities or limit our options.

Sometimes, especially when we feel desperate, it feels best to eliminate all the “bad” around us. We block people on social media, stop watching the news, try to avoid anything that might remind us of our past mistakes. With those decisions comes a series of unintended consequences—isolation, frustration and guilt chief among them. By trying to eliminate a negative, we create more negativity, and that makes everything feel worse. Let me share a personal story about that process…

Frustrated with how I felt physically, I decided I would “simply” cut out all sugar. Cut it out, I swore, cold turkey! Things went well for a time … then came the inevitable decision to break my promise, to myself and others. While it was a minor slip to some folks, I’d really meant it when I made that promise, and now I felt as if I’d let myself and others down. I wasn’t living in integrity, because I let myself off the hook and made a bad decision. Have you been there? Disappointed, because you “let yourself and everyone else” down?

Let’s look at the same scenario from the opposite choice. Instead of declaring I would become a sugar teetotaler, I chose to add more green vegetables to my diet. Gradually, I increased the amount, and I noticed something interesting. When I made the conscious choice to do something positive, my body responded with excitement and anticipation. I began to crave those leafy greens.

Once you replace negative thoughts with positive ones, you’ll start having positive results. — Willie Nelson

My mind and heart experienced a different process as well. Because I released myself from that negative promise, each positive choice became a reason to celebrate. These small successes lifted my spirit and encouraged me to keep it up.

Miranda is a middle manager in a demanding sales operation. She has an energetic and enthusiastic team of young account reps who are new to the business and eager to learn. Her biggest perceived challenge is how they learn. They are curious, and they tend to question everything. Miranda comes from a generation when workers simply “got with the program” and followed company protocol. She’s noticing these methods are not appreciated by her younger workers … and she can’t see why.

Miranda told me she wanted her people to “step up” and “grow into” what she saw as their job responsibilities. When I asked how they were failing to perform, her answer was interesting. They weren’t failing, really. In fact, they were doing a good job. So, what did she mean by stepping up?

Through our conversations, it came out that her frustrations were not really about her team’s performance. She had certain expectations about how her team would respond to her leadership, and these expectations were not being met. Instead, her younger team members asked for things they had not “earned” and they questioned “simple” rules and time-honored traditions. This response led us to a fundamental question and revealed what really had her stuck: were these people really challenging the rules, or were they offering new ideas?

Miranda bristled at this question, because, as the leader, she felt she had a ‘right’ to expect people to do things her way. Unfortunately, her focus on that ‘right’ had her stuck, keeping her from addressing the real concern—that she was unsure how to motivate her people. Through our conversations, Miranda began to shift her leadership perspective.

To get unstuck, Miranda let go of her “right” to demand conformity. Because she chose to meet her team as individuals, she was better able to understand how to inspire them.

Miranda had the solution to her concerns and the answers to her questions the entire time. Her willingness to ask and answer questions in our time together encouraged her to positive action and a proactive step past what was getting her stuck. This enabled Miranda to connect with her team in a new way, and that connection is creating some exciting new opportunities for her and her team.

What are some choices that have made a positive difference in your life? Share in the comments below.